Are good friends Carrie Brownstein, also in Sleater-Kinney, and Mary. Both Carrie and Mary switch off on vocals and guitar, intertwining sounds not totally unlike Sleater-Kinney. They use a drum machine to augment this sound. Their EP, the Age of Backwards, contains three original songs and a cover of the Who’s “Can’t Explain”. So far the Spells have only played one show and released one EP, but have tentative plans for more of both in the future. There were plans to play the Yo-Yo-A-Go-Go Festival in 1999, but unfortunately those plans were canceled.

A bit of background: Carrie used to be in a band called Excuse 17, which opened for Helium when they toured for the Dirt of Luck. Later on, Helium opened up shows for Sleater-Kinney when the two bands toured Europe together, further cementing Mary and Carrie’s relationship.
Mary has also opened for Sleater-Kinney solo (playing with Christina Files).

Fun factoid: the original name was “the Fountain”.

Both Carrie and Mary appeared together in February 2000 in Priceline.com ads, with actor William Shatner being the main focus of these ads. Mary and Carrie can be seen in varying lengths of these seven commercials.

**In 2008, they released a “new” EP via NPR called Bat vs Bird. Carrie was writing a column for NPR at the time called Monitor Mix, and interviews for Mary for the release. Here is the artwork in full for the release.**

June 20, 1998 @ Capital Backstage, Oly w/ Sarah Dougher, Stiletto
Carrie said they had only been practicing since Tuesday and frankly, it showed. There’s much potential there, for sure, but right now I didn’t feel that they blended very well. For example in Sleater-Kinney the way Carrie and Corin play off each other, both in vocals and with their guitars, is wonderful. Mary and Carrie were still trying to find their own special groove. The one song that flowed better than the others was were they had the keyboard going in the background. It made the song a little more cohesive. They only played four songs for a grand total of 11 minutes. But it was a fun night. I even walked back to my apartment inbetween sets. You have no idea how exciting this is for me. (Show flyer scanned & review by Michelle) 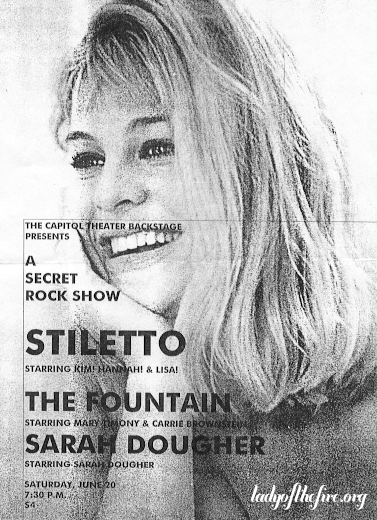 Check out the Spells Section