Here lies an interview with Mary Timony of Helium
By Sheila Burgel
Plume Zine Number Five March 1994
What’s your favorite breakfast food?
Mary-Well, right now it’s breakfast time and I am eating spaghetti that my friend Joan made last night.
What makes you really happy?
Mary-Sometimes nothing at all and sometimes anything will.
What is your favorite Brady Bunch Episode?
Mary– It’s hard to relate to any of them because I haven’t seen the stupid show enough. My mother only let me watch Mr. Rodgers and Electric Co. But if I were to draw from my very small collection of memories of the few episodes I saw, I would say the SCARY SPIDER in Hawaii, was my favorite character, but how can you relate to a spider?
What are your hobbies?
Mary-Collecting worms.
What do you prefer-Friendly’s or Woolworth’s and why?
Mary-Woolworths! Woolworths! Woolworths is Heaven for the likes of me and any girl who like sparkles and stolen earrings, lipstick and Barbie press on nails. Woolworths, Woolworths, Gave me my birth, it’s my home turf!
What’s the best thing about being in Helium? How long have you been together?
Mary– Not being able to have a full time job so that I have trouble paying my rent and I have to eat beans and think that 65 cents for the bus is alot of $$$$$.
What are some of your favorite bands?
Mary– Hold on, I want to talk more about Woolworths. I have a place in my heart which is saved for this store and others like it, for example: Osco Drug (Boston) or Peoples (D.C. my home). I’m not sure, but I think that I love them because they are a little amusement parks. Related to this is the love some of us have for convenience stores, like Store 24 (Boston) and 7-11 (D.C.). I had a realization a little while ago that I felt more at home in Store 24 than I did in my apartment. I move around so much, but the convenience store will always be there. In these modern times, styles and technology and that kind of stuff changes, but convenience will always be with us, infact convenience is growing bigger and bigger. Everything is becoming moreconvenient.
-Talking is more convenient: Faxes, computers
-Entertainment is more convenient: my roommate Chuck has a 5-CD Player that I’m listening to right now.
-Even killing someone is convenient: AUTOMATIC WEAPONS YIKES!!!
What are future plans for Helium? Are you going to put a record?
Mary-An EP out in February.
If a crazy old lady fell on the sidewalk and was crying, would you helpher up even if she seemed a little scary?
Mary-Yes, although I personally think I’m pretty MEAN
What’s your favorite supermarket?
Mary– Supermarkets are a little different. The satisfaction I get from them is a little more tiny (compared to Woolworth’s and Store 24). They aren’t immediately FUN FUN FUN!!
Describe a perfect day.
Mary-Dropping a bomb on patriarchy and then electing an all-female government.
Would you rather wear beautiful shoes but are really uncomfortable or really ugly big shoes, but are really comfortable?
Mary– Beautiful shoes that are really uncomfortable-anything that makes men think you’re better to look at.  NOT
If you could go apple picking with anyone, who would you go with?
Mary-YOU
What’s the meanest thing you’ve ever done?
Mary-Turned into a vampire.
The last question asked Mary to draw or say anything she wanted: 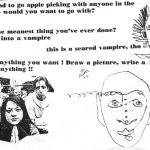